The Wellkeeper Step by Step: Making a Panel

Hey there, folks. Dee Fish here, creator and artist of the most awesome indie comic you may have never heard of, "The Wellkeeper".

"The Wellkeeper" is the story of a young woman named Zoe Kostopolis who has inherited a power passed down from mother to daughter across the generations connecting her to the life energy of the planet. This connection allows her to communicate with and control various forces of nature, plant life and animals. The problem for ZOE is that this power skipped a generation as her grandmother had a son, not a daughter and so she's getting these gifts without knowing why or where they come from. And now Zoe is on the run, trying to understand her new gifts, while being per sued by a dark figure called The Withering Man that is trying to destroy her to end the lineage of Wellkeepers.

Okay, now that you have the convention blurb, we can get to the meat of all this. What I'm doing here is taking you all inside the process of making a page of an issue of "The Wellkeeper". In this case, specifically page 9 of issue #8. Now, super minor spoiler alert for those who haven't read issue #7 but who MIGHT want to have a little context for the page you're about to see constructed: The Withering Man and his Thrall (A demonically controlled dog, burning with black fire) have attacked Zoe in her grandmother's home. Zoe has used her gifts to momentarily hold BOTH threats at bay by growing roots and vines around them. That's where we come in to page 9.

Now, I'm a fairly casual artist. I tend to do most of my pages in my big ol' comfy chair on a re-purposed computer lapboard. I HAVE a work desk, but I prefer to sit with my significant other and watch movies while I work on Wellkeeper pages.

ANYwho, I write out issues VERY loosely as I work. Generally, when I get started on a new issue, I rough out 22 to 24 small boxes on a sheet of paper in my sketchbook. Each box rarely any larger then an inch or so. With those boxes, and a rough idea of what all needs to happen in this issue, I begin roughing out the scenes. SUPER loose thumbnails with hand written notes for dialogue that, if I'm lucky, I'll be able to reinterpret correctly when I get to the actual page. 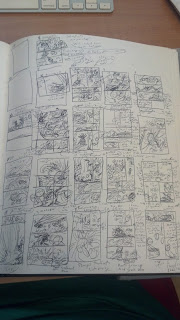 Seriously, you try figuring out these scribbles!

Now, in this case, page 9 had to be re-laid out as I tend to rework pages as I draw them, often expanding on storytelling or compressing elements as I work. It's a fluid process to make each issue and I prefer working in such a way that allows me as much flexibility as possible to keep the process FUN.

So, with that in mind, I needed to draw a NEW thumbnail for this page before beginning. 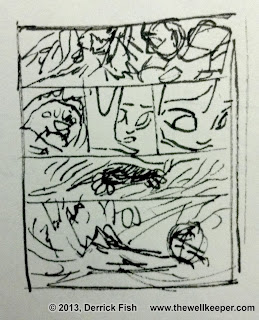 Yes, I somehow know what these seemingly random lines mean.

Because, at this point in the story, the house is on fire and crumbling apart AND Zoe is being attacked from multiple angles, I wanted the storytelling to be VERY claustrophobic. I've already given lots of establishing shots and detailed backgrounds on past pages and wanted this sequence of events to be shown with tighter "camera work". A focus on Zoe's face and sense of panic. 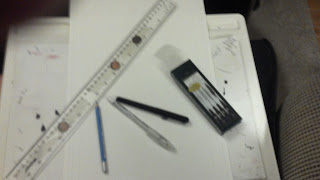 If this photo wasn't so blurry, you might notice that
this lapboard is totally covering up my crotch.

Using my handy dandy blue pencil and ruler, I line out my panel borders and begin roughing out the figures for the page. For the most part, my pencils are NOTORIOUSLY loose and light. I have nobody that has to approve my pencils before I ink but myself and I like to do most of the work in the inks. I think I'd go insane if I had to do full, finished pencils and THEN ink over it. I don't know  how most comic artists do it.

Now, this page features the Withering Man's THRALL. The Thrall is a mind controlled dog introduced earlier in the series. Since this dog is specifically a Rottweiler, it helps to use actual reference on occasion to keep it from looking like some generic, snout faced thing. 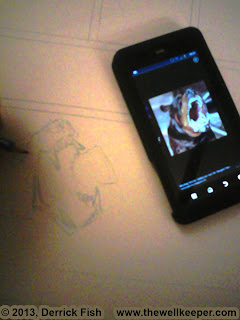 Sorry this picture looks like poop, but as you can see,
the camera phone I used for the REST of these pictures
Is busy being useful.

Aaaaaan, the rest of the page... 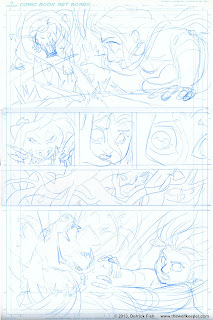 SERIOUSLY darkened in photoshop so you can actually SEE the pencils.

As you might be able to tell, I've tweaked some of the storytelling slightly in the pencils. In the thumbnail, Zoe was looking away in panel 4. As I was drawing, I decided to have her gaze switch to a more fearful, straight on expression.

From here, I pull out the Faber-Castell brush pen. In a technique I unintentionally stole from Teenage Mutant Ninja Turtles creators Kevin Eastman and Peter Laird, I ink my panel borders freehand with the brush pen to give them a looser, more energetic feeling. (Kevin forgave me on Facebook, so I feel better. lol) 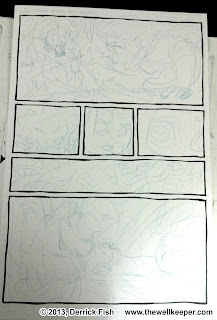 I like the more organic feeling these rough borders give the page.

Now, in part because I'm left handed, I ink from the bottom right up. As such, to avoid smearing, I always keep a paper towel beneath my inking hand. I also usually ink each panel completely before moving up. Some artists ink all the faces and figures first, or work with each tool first across the page. Personally, I like finishing each panel before moving on to the next one. As such, this whole thing will focus on the creation of this bottom panel from here on out.

Working from thick to thin, I use the Faber-Castell "M" point first. This is a 0.7 mm. pen tip that gives nicely with a little pressure that I usually use for the thickest line work. In this panel, that is reserved for the swooshing lines of Zoe's magical energy. 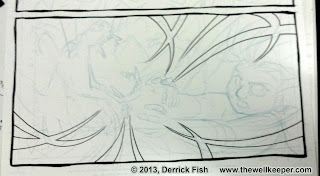 I've tried using french curves for her swirly magic, but prefer doing them freehand. Like everything else, I feel that it helps the pages feel more organic and hand drawn.

From here, I use the Faber-Casell "F" point pen. It's a o.5 mm. tip that I generally use for most of the figure work and overall outlines in any given page. 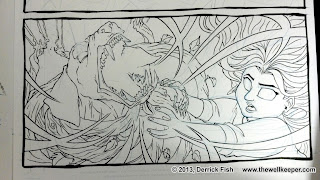 Insert "You've Got the TOUCH!" here.

I tend to keep smaller facial features and eyes to smaller pen tips. As this is a fairly large panel, I inked MOST of Zoe's face with the "F" pen tip.

From here, I can begin spotting blacks. Zoe's shirt, the Thrall's burnt skin texture and Zoe's hair rendering are all layer in with my beloved Pentel Brush Pen. Have I mentioned how much I adore this pen. It's AWESOME. I can get the finest, most fluid brush lines and the fattest, scruffiest dry brush effects and I haven't ever had to clean the tip once. It's a miracle tool. I heart it. 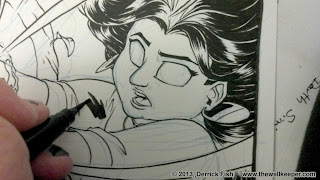 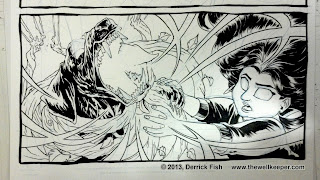 Look at those juicy black lines.

Before I found that brush pen, I used to render Zoe's seriously long, dark hair with a pen nib and it took FOREVER. Thankfully, now I can save that time for rendering OTHER things, like the textures of the vines and roots wrapping around the Thrall here. I can also feather out the shadowing on Zoe's shirt and add details to her earrings. For this, I use the Faber-Castel "S" tip. 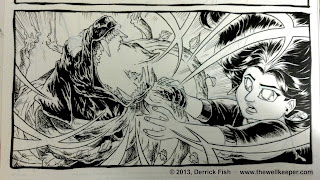 The rendering with the "S" tip helps the image have more volume.

The "S" tip is where I do the BULK of my rendering. It's fine enough to cover most of the work needed on the page to give it the sense of detail I want. Because the Wellkeeper is a black and white comic book, I made a conscious decision early on to put as much effort as I could into rendering the book as richly as is possible to pick up the slack. Texture, volume and lighting go a long way towards selling the illusion of reality in such a fantastical story and the amount of rendering I use helps sell that reality, in my opinion.

Now, from here I use the "XS" tip for the FINEST rendering lines: the shadowing on Zoe's face. Now, it's often said that every line you add to a face adds AGE to that face, and that's the truth. That often makes rendering shadows a VERY difficult gambit. And in THIS issue, Zoe's extremely exhausted. Virtually on death's door, and needs to look it. I've added with the finest tipped pen I have, bags under her eyes and shadowing. 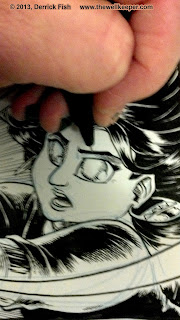 Fighting ancient evil is hard on the complextion.

Once the fine lifework is done, I break out the White Gel Pen to add separation halos around overlapping elements and help pop out things like the bursting energy lines as seen here. 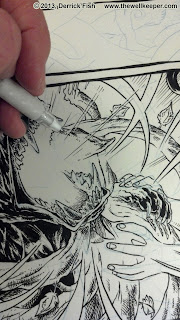 And with this final touch, this panel is complete and I can move on to doing the same thing for the rest of the page. And then repeat the process for every OTHER page that makes up one complete comic. Once each pages complete, I scan it in to my computer and letter the pages  digitally. (My handwriting is PAINFULLY horrible, as is my spelling.)

Now, of course, if you're saying to yourself "HEY! What about showing us the REST of this page!", you'll have to buy a copy of "The Wellkeeper #8" when it premiers. Don't be greedy.

I hope you enjoyed this behind-the-scenes look into the making of "The Wellkeeper". Remember to keep up with all the Wellkeeper news at www.thewellkeeper.com or on our Facebook page!

And if you're interested in the comic, the COMPLETE SERIES can be ordered TODAY either in print or as PDF downloads! Get in on the excitement today! Thanks! 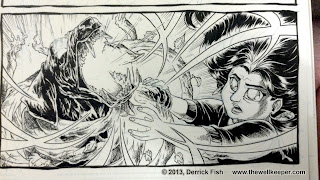 See you in the comics!

This is some great insight man. Dug the whole thing. Glad other folks are using the pental brush pen, I love it, personally! CHEERS!

Thanks. I'm in love with that pen. It's amazing. 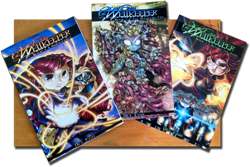 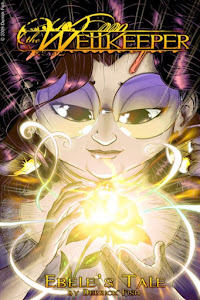